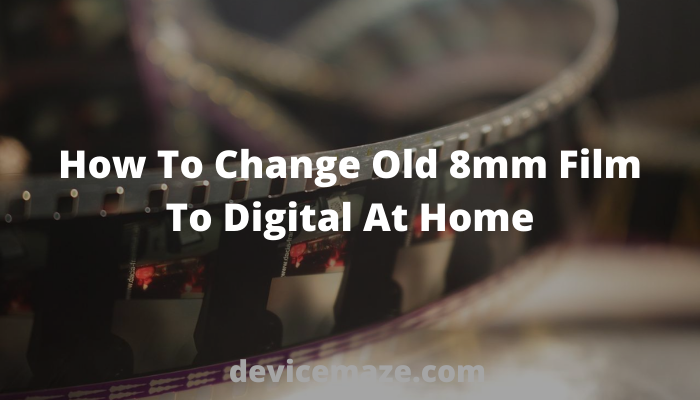 Memories will stay with you for life, but your old tapes and films won’t. They were designed to be stored at optimum environmental conditions only. Even though you store them in dry, cold conditions, there’s still a chance that your old VHS tapes or 8mm films will somehow catch moisture and deteriorate, making your tapes irretrievable.

Interestingly, modern technology is backing you up with several methods to convert 8mm film to digital yourself or VHS tapes in the quickest way and time possible. You don’t have to be a computer wizard to carry out this process. You can change your old 8mm film and digitize them at home with minimal cost and time.

Benefits of changing your 8mm film to digital format

If you still own 8mm films lying around in the dust, you have a chance to restore those 8mm films and keep them fresh for playing forever.

Reminiscing about the good old days is the best recall exercise you can do. If your 8mm films are working perfectly fine, you can play them immediately. However, there is no harm if you preserve them in the MP4 format as it is a much safer and more effective way to digitize your memories.

As you know, technology changes and evolves constantly. Since 8mm films are the oldest format, there is a high chance that 8mm films will no longer exist in the coming few years.

Thus, it is best to convert them into a digital form before getting brittle or wrecked. Once your old 8mm films are in digital format, you can play them anytime, anywhere, hassle-free.

8mm films are stored in the form of reels which are significantly bulky and space-consuming. Storing them digitally does not take any space physically. You can store these digitized videos on the cloud or on your computer.

This is the most significant advantage of converting 8mm films into MP4 format: you save a lot of space in your home by discarding the old 8mm reels.

Method to change old 8mm film to digital at home

The most effective and easiest way of changing your 8mm film video at home is to record them using a digital camera.

Use a DVD recorder.

The second most effective way of converting your 8mm films to digital is by using a DVD recorder.

This is the best and most effective way of transferring the 8mm films into digital format without any risk of losing your data. Professionals handle your 8mm films and convert them into your desired delivery mode, including Blu-ray, SD card, Hard drive, or DVD.

The price of transfer services depends on the scanning mode, resolution, and delivery format. Ensure the service provider also offers cleaning and repair services included in the same package. Some of the top-notch companies in the area are;

DiMyPics, HeartlandBox, iMemories,Just8mm.com. You can opt for any of these services; they are all great variations in packages. You can choose the service provider which best suits your budget.

These were ways you can easily change your 8mm films digitally without doing much legwork. You have to get the right equipment and knowledge to get the conversion done.