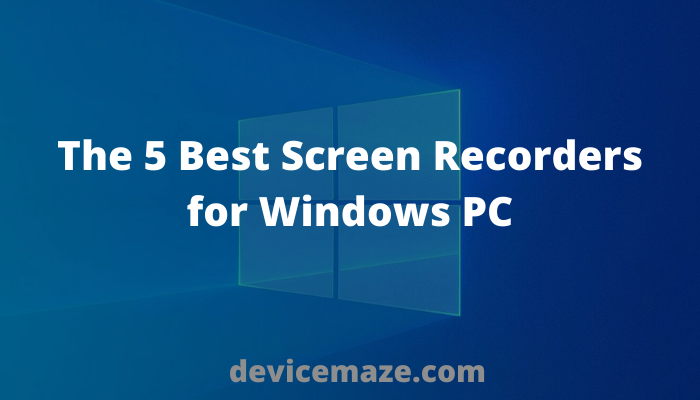 A screen-recorded video with the entire screen can be more useful than a single image. Because the video explains everything you need to know about using your computer. You can record instructions for helping someone debug their PC or can record a gameplay video and publish it on the Internet. You can also create a video tutorial and learning course using a screen recorder on your Windows PC.

Before choosing a screen recorder for PC, keep a few things in mind. For example, the screen recorder’s user interface should be simple to learn and use, and it’s better if it includes an in-built editing tool. Screen recording programs should use fewer system resources and be compatible with the most recent versions of Windows.

Let’s look at a list of some of the best screen recording programs for Windows.

If you’re looking for a basic screen recording program, iTop Screen Recorder is a good choice. It can be used as a web-based screen recording tool, or you can install it on your Windows PC. The user interface is straightforward, and all you have to do to begin recording is press the record button.

You can record anything on your screen, including video streams, video tutorials, and live chat. iTop also allows you to export your recordings in a variety of formats, including MP4, AVI, FLV, MKV, MOV, TS, and GIF.

It allows you to annotate in real-time, capture video on your screen while simultaneously recording audio from a microphone, insert webcam recording, and more.

Bandicam is a widely used screen recording program with millions of users around the world. You can draw on your videos, which makes creating teaching videos easier.

You can save your recordings in MP4 or AVI file formats or add a webcam overlay to the screen recording. This program allows you to record 4K UHD videos at up to 480 FPS.

Other features include the ability to record the system and your voice simultaneously, as well as mouse click animation and effects when recording.

Camtasia is a multi-purpose program that allows you to edit videos as well as record anything on your screen. You can choose from a large number of templates and apply them to your videos.

You can record an online meeting, gameplay, or a teaching video with the screen recording feature. You can choose to record the full screen, a specific section of the screen, a window, or an application.

Webcam capture, mic and system audio recording, annotations, cursor effects, and more are all included in Camtasia for you to use.

Wondershare DemoCreator is a Windows recording and video editing program. You’ll be able to capture anything on your PC’s home screen, webcam, system audio, and microphone with this program.

It allows you to draw or annotate anything on the screen in real-time, as well as apply different mouse highlighting effects.

Additionally, Wondershare DemoCreator allows you to effortlessly zoom in on a specific portion of your screen while recording.

Additionally, Wondershare DemoCreator allows you to effortlessly zoom in on a specific portion of your screen while recording.

ShareX is a free and open-source screen recording and snapshot program.  On ShareX, you can use a variety of capture methods, such as monitoring menu recording, active window recording, custom region recording, and so on.

GIFs and video files can both be captured. Furthermore, there are no watermarks on your recordings. It includes a video converter, a video clip, an image editor, and a number of additional features to make recording easier.