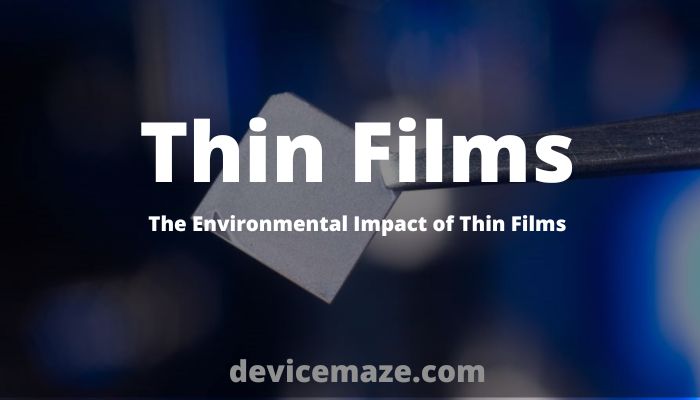 Thin films have started to be used in a variety of different applications. This innovation has started to find use in fields such as important sensor, medical and electronic equipment as well as solar panels.

As the use of thin films becomes more widespread, one thing that many people are worried about is how sustainable these materials are.

Made using a deposition process, and demanding an intense disposal process, it takes a lot of energy and resources to make the thin films. So, although they are undoubtedly helping drive forward new technologies, could this be at the expense of our environment?

In this article we’re going to be taking you through both sides of the argument and seek to uncover the real environmental impacts of thin films and how they can be minimised.

Keep on reading to find out more!

The Role of Thin Films in Renewable Energy

One of the primary uses of thin films at the moment is in solar panels. This is a hot debate as although they are being used to generate renewable energy – which is what our planet needs to remove our reliance on fossil fuels – they also create a large environmental impact due to their production and disposal process.

As discussed in this post by Korvus Technology, the deposition process that’s used to create thin films is very complex and time consuming.

The negative impact of thin films

To make thin film solar panels, you typically need rare-earth elements such as indium and gallium or toxic metals such as cadmium. These materials are extremely expensive to manufacture and source.

On top of this, the entire process uses a lot of energy and heat. So, although they are being used to create a really sustainable product, they’ve created a very large carbon footprint in the process.

The process also demands a variety of chemicals, which have the potential to leak out through cracks, posing a risk to those around them. Because of this, they need to be properly disposed of through a process that, like their production methods, requires a lot of energy.

The positive impacts of thin films

Although it may seem like thin films are not appropriate for renewable energy, they are able to provide a range of important benefits.

Thin film solar panels are far more efficient than conventional models as they are much more lightweight, affordable, and don’t require large amounts of silicon.

They can be used to power homes, vehicles, or other electronic devices effectively, and because they are helping to make solar panels smaller and lighter, they are easier to install and can cover much larger surface areas.

The benefits of using thin films in solar panels is clear, but it’s important to address the many sustainability concerns first.

How Can we Make Thin Films More Sustainable?

The main way that we can seek to make thin films more sustainable is by tackling the current impacts of the manufacturing process.

The current process demands a lot of resources and energy, which is not the most sustainable. However, there are many experts in the field that are exploring new manufacturing methods that could be the key to making the future of thin films much fairer on the environment.

One new method of manufacture involves using a native buffer layer rather than the typical cadmium sulfide buffer layer. This switch in materials allows the oxidation process to occur in a matter of hours – rather than a couple of months like it’s normally expected to.

In order to cut down on the amount of heat that’s used during the deposition process, other scientists have developed a “liquid-assisted method” of manufacturing. By using this new method, experts have been able to use much lower temperatures during the manufacture of thin films without compromising on the quality of the end product.

If we want to bring thin films to the mainstream, it’s highly important that more innovations like the ones are made to improve the sustainability of the manufacturing process. In order to be truly useful, thin films must be more economical, efficient and eco-friendly.

In this article, we’ve gone through the environmental impacts of thin film technology and how it can be improved to drive forward renewable energy and become more sustainable.

There are many reasons why thin film technology can have a negative impact on our planet – mainly due to the process in which they are manufactured – but there are many experts out there who are trying to find alternative processes that are less resource intensive.

Although you could say that thin films are not the most sustainable materials, it’s clear to see that in the near future they won’t be as much of an issue – in fact, they are an extremely exciting innovation that we can’t wait to see more of.

If you want to keep on learning about what’s new in the technology industry, keep up with all of our latest updates.