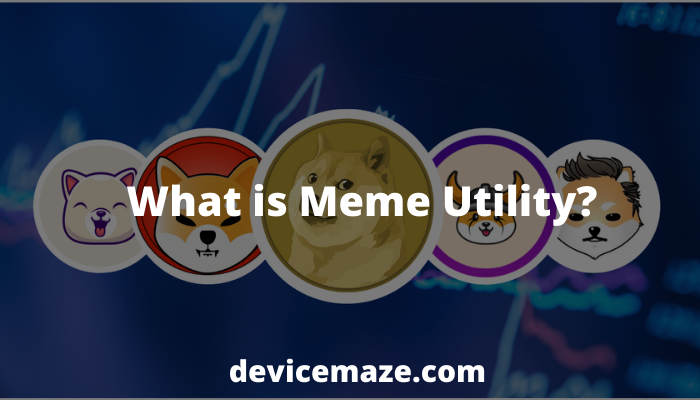 Before talking about “meme utility” we must be familiar with the word “meme”. Every person on the internet in this modern age has encountered this term one way or the other. So what is referred to as a “meme” in the world of the internet?

What Is A Meme

A meme is a picture, video, or piece of text meant to present an idea or a message in a humorous way. It is the simplest form of conveying your message through a small piece of graphic having images and text in it.

It spreads rapidly through the internet, commonly referred to as going “viral”. So in proper digital terminology, we would say that it has the potential to go viral immediately.

Once we know the term “meme”, it becomes easy to explain what is a meme coin or token.

The term “Meme token” corresponds to a cryptocurrency that is based on a famous or viral meme and this is created for fun. The memes token does not have any blockchains, instead, they use already existing blockchains of some other coins like bitcoin or Ethereum. Some of the famous examples of meme coins are dogecoin and Shiba Inu.

In early 2021 the meme tokens got popularized by dogecoins which were created as a joke and then got a market of billions of dollars. During this time many people tried their social media skills of creating meme tokens to get the same fate as dogecoin got. Few of them got what they really hoped for. This was the time when HOKK finance also began its adventurous journey when a new meme token “Hokkaido Inu” joined the race of meme tokens.

Very quickly they realized that they were into some good standings in the market when they reached their all-time high of eight hundred million dollars and also their single-day trading volume hit a high of 98 million dollars.

In the fun and adventurous race of meme tokens, not all are winners. A few manage to survive the journey, and even fewer meme tokens end up having a real use in the real world. Many people buy the meme token just in hope that some celebrity may endorse it in some way, making its value go sky high. Even the rumors of a celebrity endorsement of some meme token can lift up its value to great heights.

HOKK Finance embarked on a daring journey with the purpose of making history, thanks to the combined efforts of our passionate leadership, a supportive and dedicated community, and new strategic recruits.

HOKK finance, with Hokkaido Inu, is also focusing on development to deliver the latest technologically advanced financial solutions that can help in transforming the lives of people. We are ambitious to provide the greatest products with a decentralized finance system on different blockchains. We are also developing marketing activities to provide long-term strategies to make connections for a decentralized financial system.

Our meme token “Hokkaido Inu” is being utilized in its usefulness to make the lives of the people easier across the globe with a decentralized financial system through different blockchains and getting them free of the status quo of the centralized banking system.

HOKK Finance has the firm ambition to make it possible for people to create meme tokens for different blockchains following our example of bringing fun and a community spirit to cryptocurrencies. We want to leave a legacy in the crypto world of being a successful blockchain firm that is committed to empowering the people in a decentralized financial system.

Some of the meme coins performed relatively better than most of the regular cryptocurrencies such as Bitcoin and Ethereum in terms of popularity.

The top ten cryptocurrencies have two of the meme coins listed with them. Shiba Inu and Dogecoin have done extremely well during the last year and have a market of billions of dollars.

Meme coins are increasing by the day and getting a lot of success in the decentralized financial market on different blockchains. The most famous of these meme coins are Shiba Inu and Dogecoin.

Regular cryptocurrencies and the big coins in the market such as Bitcoin and Ethereum have their own technological infrastructure known as blockchain that makes them secure and easy for transactions and trading. On the other hand, meme coins are created with the hype of some social media meme or a tv program making people interested in having to own a coin of their favorite show.

Meme Tokens Are Here To Stay

There are ups and downs in all the different cryptocurrencies and it is the same for the meme coins, for example, Shiba Inu and Dogecoin are still counted among the top ten cryptocurrencies in the world. The meme tokens are a real thing and they have come to stay in the market and make an impact. The growing number of meme coins is a reality and one should better wake up to it and keep an eye on the rising trend of mems that are generating tokens and coins to have their due and fair share in the world of cryptocurrencies.