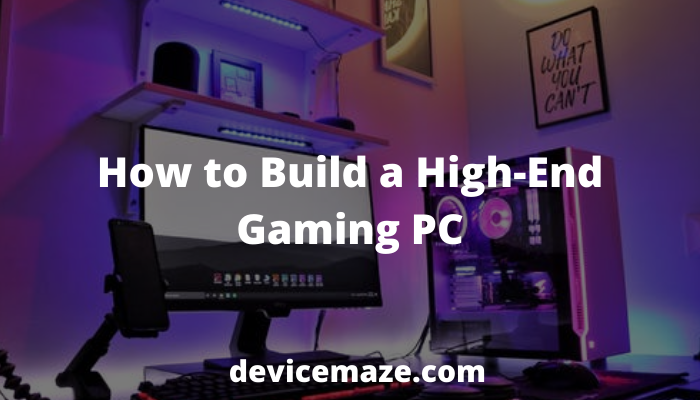 You might have seen many ASMR videos online of how they are making aesthetic PC builds and you might be wondering how to build a high-end gaming PC with ease. Although it is quite fun and easy once you gather all the components from many other counterparts. According to Gaming Silk, the biggest challenge is to decide and determine what type of component you are going to have to complete your PC build.

Major Components of a Gaming PC

Like all other generic PCs, the high-end gaming PCs also include basic components which are listed below:

The generic chassis we have witnessed in offices and business sectors are quite straightforward and compact to tuck in all the PC components. The high-end gaming PC chassis is somewhat similar but it is considerably spacious and flashy from inside and out to look more aesthetic. The main reason for its inside view is the side glass panel which lets you sneak through and see all the bold hardware sitting with the right cable management.

A high-end gaming PC chassis also features a PSU basement to house all the cables and the PSU itself underneath and out of the glass panel view. These chassis are designed to make your high-end PC build stand out most.

Also, read The Different Components Of A Personal Computer!

A generic PC also has a motherboard that is quite shady and built to sit quietly at its place while the gaming motherboards are made enthusiastically to pop out through the glass panel view. Moreover, a gaming motherboard has a strong build quality and tough VRM design to sustain a high overclocking potential.

A CPU is the most crucial component whether you are using a generic or gaming PC, the CPU must be responsive and fast. A high-end gaming PC of the present time should have at least AMD Ryzen 3rd gen or Intel 10th gen processors, to help deliver maximum performance.

RAM is a primary memory situated close to the processor on the motherboard. The generic RAM has a typical exposed PCB while a high-end gaming RAM has its PCB covered with some sort of heatsink and sometimes a bar of RGB lights on the top of that heatsink. Moreover, the gaming RAM has more frequency than that of generic RAM. DDR4 is the most favorable RAM type of the present time.

A typical power supply of a generic PC is somewhat close to 500 watts and is made mostly out of 80 Plus standards, whereas a high-end gaming PSU is made of 80 Plus standards to minimize power wastage and minimize voltage surges to ensure the longevity of all the precious PC components. We recommend all of you not to buy a cheap PSU to put all your other expensive hardware in danger.

We recommend any 80 Plus Silver or Gold PSU for better results.

Hard disks are quite slow, so we recommend that you buy an SSD for your high-end gaming PC. There are two types of SSDs generally known as SATA SSD and PCIe (M.2) SSD. SATA SSDs are cheaper as compared to M.2 SSDs and significantly slower, but it is enough for gaming needs.

The involvement of a graphics card in a PC makes it whole high-end in the true sense. The graphics card is the key component for a gaming PC which ensures maximum performance in gaming aspects. However, the GPU also can do other intense tasks like rendering as well. We recommend Nvidia RTX 2000 series or AMD RX 5000 series as minimum entities for a high-end PC.